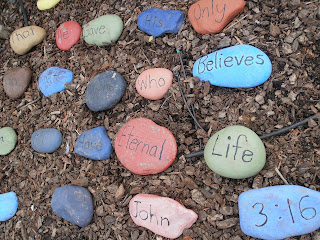 First Lutheran in Yuba City, California, has John 3:16 printed out on rocks as part of their landscape design.  My eyes were drawn to the beautiful pastel colors as I entered the church from the adjacent parking lot.  It is a colorful rock solid message of how we are loved by our Father. What a sweet reminder of why we continue to sing about the costly love of our Father.

After our last adventure with chickens, I thought it was a hoot that the Yuba City, Chamber of Commerce keeps chickens!  There are about 15 or so... none of them made a move to travel with us. :) 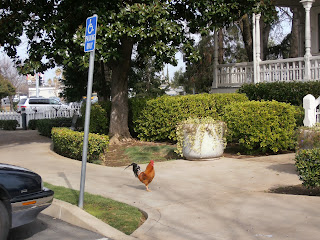 Posted by Life With HaRVey at 10:58 AM No comments:

At the risk of repeating myself, yet again, I love our traveling life.  We are in Sacramento, California, as Uncle Willis celebrates his 75th birthday this week.  How could we miss this momentous occasion? It was a joyful evening full of light-hearted merriment.
Uncle Willis traveled to West Bend, Wisconsin, for our wedding; he visited us in San Diego, when Dave returned home after a six-month deployment; he made the trip to Minnesota as his sister was in the early stages of Alzheimer's and he attended our daughter's wedding in Seattle. He has been there for us as a dear uncle would.   In his younger years, Uncle Willis played in a blue-grass band and always invited Dave to play along when we were in the area.  When Willis no longer played with the band he gave Dave his 5-string banjo, which now lives with us in haRVey. 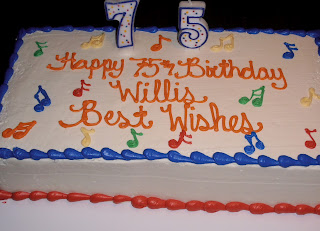 Uncle Willis is one of those people who makes you smile at the thought of him.  You cannot pick your family, Willis would have been picked regardless!

We thank God for Willis, and the extended family he brings to our lives.
Posted by Life With HaRVey at 1:55 PM No comments:

A New Level of Free Range

I am not sure Whitey intended to make a break for it, her agenda may have included a trip across the road, but probably not to the nearest rest area off of I-5  Here is the story... 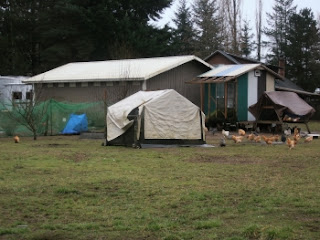 Here you can see how very close the object of  Whitey's get away was (haRVey), only one fence over which she had escaped many times.

Who can know the mind of a chicken?  We should have been on to her game when she showed up in the RV doorway thinking she would have a look around.  Dave shooed her out, but not before she had a good chance to look over the joint!


Whitey found a quiet place on the rear bumper of haRVey, where she no doubt spent considerable time hatching her escape.

She had overheard our plans to travel to Redding, California,  and being a Spring chicken, she knew it never rained in California and she was moving on to the sunny-side-up state.  Waiting for just the right moment prior to our departure, Whitey, perched then moved over easy to settle in on the sheltered area near the back bumper of haRVey, not even braving a last look at the old hen house.  Little did this chicken know that our first stop was an RV rest area with a dump station.  We parked at the rest area preparing to dump our tanks. Whitey was twelve miles from home, in the harsh wilderness near a Washington freeway, with cars sceaming by.  Whitey cautiously left her perch, to check out what she thought might be California.  With a casual look at Dave who had unwittingly helped her escape, Whitey made a break for the trees - with her graceful chicken gait, a white bird in the dark underbrush.  A chicken alone in the wilderness at the Gee Creek rest area off of I-5.

Whitey's owner heard the news of her escape and planned to let her stew a bit, but thoughts of her inevitable untimely end prodded him to rescue the benedict hen. With a net and feed in hand he traveled to the Gee Creek rest area to rescue the wayward hen.

Posted by Life With HaRVey at 8:40 AM No comments:

Last year as we cruised through Florida, we met Margaret at the CD table following worship.  Her mother bought one CD and she purchased the other.  Margaret's mother, heard the song "One Flesh" and knew Margaret would be moved by the song, and indeed she was.  Alex and Margaret invited us to be part of their vow renewal basing the service on the song,
"One Flesh"
Posted by Life With HaRVey at 12:27 AM No comments: