So here we are in Ramona, California and our truck dies. And you know what comes next - Fernie, a diesel mechanic and a member of Ramona Lutheran Church. He was able to fix the fuel filter gaskets, and install new batteries. Fernie was able to do all of this without a garage, without a waiting list, without a tow truck and with much good humor and was happy to be of help. Just so you know, not every church has their very own diesel mechanic.
Posted by Life With HaRVey at 11:46 PM 1 comment: 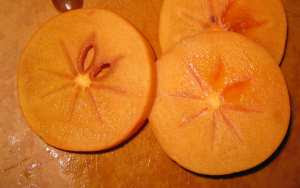 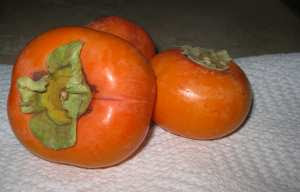 Another new food for me. Persimmon's are a wonderful fleshy fruit without seed or pit. It is a little bit like a meaty tomato or a melon, but with a citrus taste. I lived in California many years ago and I can't believe I missed this little treasure!

Posted by Life With HaRVey at 3:24 PM No comments: 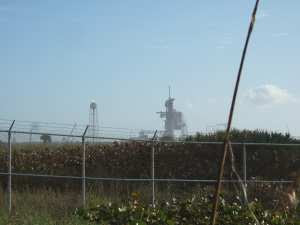 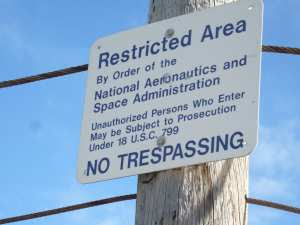 I remember as a child watching Walter Cronkite explain with diagrams and models the Apollo missions and what was happening in space.
I usually lasted about five minutes before I was off to something else very important - like read Nancy Drew.

Today we watched the Atlantis launch online, how compelling to watch now (older/wiser) as opposed to the Apollo missions of the late 60's and early 70's.

These pictures were taken from as close as you can get to the launch site last December. Dave and I were privileged to be staying near Cape Canaveral, FL. Okay, so the one picture is from the NASA site. 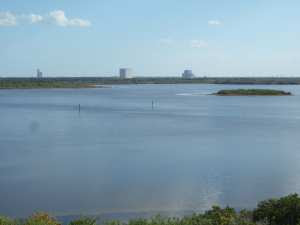 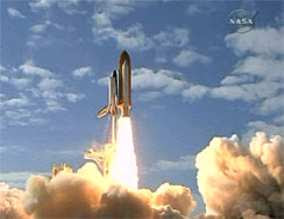 Posted by Life With HaRVey at 7:41 PM No comments: 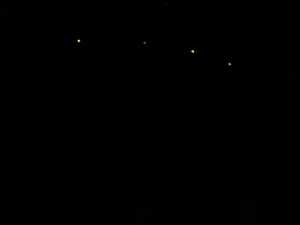 Here it is... just like in the movies, except at night. AND the nice folks who live around the the sign DO NOT want you to stop. In fact, there is a friendly man with a bright light and "security" embroidered on his shirt who will help you find your way OUT.
Posted by Life With HaRVey at 7:34 PM No comments: 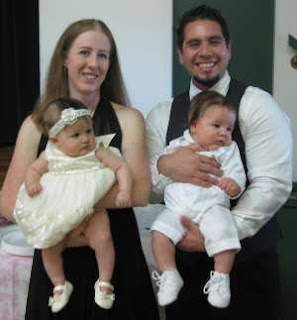 Part of Dave's duties this past Sunday included a Baptism - I love a baptism. It reminds us of where we belong, who we belong to, and how we simply receive the gifts Jesus won for us.

Pictured here are twins Ethan and Sydney and their proud parents.
Posted by Life With HaRVey at 5:36 PM 1 comment: 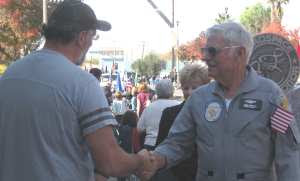 While in Lancaster, California, which is next door to Edwards Air Force Base, we were able to attend the Veteran's Day Parade. It was a highlight for Dave because here he is shaking hands with the parade Grand Marshall, pilot Dick Rutan.

Dave, who loves all things aerospace - was excited to actually see someone about whom he has read. Dave got a hand shake, I got the photo.

The following is an excerpt from Mr. Rutan's website, an account of the historic flight of the Voyager, which was piloted by Dick Rutan and Jeanna Yeager...

"On a cold December morning in 1986, the fuel laden Voyager struggled to become airborne to begin her journey around the world.

On one tank of gas and without refueling, the carbon composite honeycomb sandwich airplane, designed by Burt Rutan [Dick's Brother] would fly around the globe. Taking off from Edwards Air Force Base in California on December 14, 1986 and landing 9 days, 3 minutes and 44 seconds later on December 23, 1986, the Voyager set absolute distance records and many other world records that remain unchallenged today."
Posted by Life With HaRVey at 5:17 PM No comments: 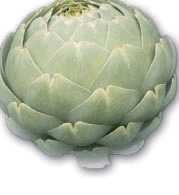 I did not know that I loved artichokes. Who came up with the bright idea to eat an artichoke. I think it must have been a dare.

They do not look tasty, just pokey. But, oh my, in the hands of a person who knows how to prepare my new favorite food - what a treat! Thanks Cindy.

Posted by Life With HaRVey at 3:59 PM No comments:

A new bird for me 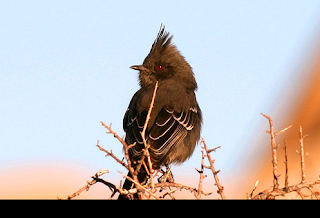 The Phainopepla, (I can't say it either) but I saw it; therefore, it is now on my list. This bird can only be found in the southwestern desert areas of California, Arizona, and Mexico.
Posted by Life With HaRVey at 4:57 PM No comments: